Birds, bats, and insects are the only extant groups that contain species that with their own bodies can slip the surly bonds of Earth and fly up into the heavens. They are therefore the only extraterrestrial life-forms with which we routinely have close encounters.

The precise act of mating in birds is frequently a fleeting event. Swifts even perform the almost instantaneous procedure while in flight and less frenetic birds like hawks spend hardly longer in love's embrace. Bird copulation is clearly nothing like the prolonged sessions we associate with the act yet in all likelihood some drive like ours brings the male and the female together and, in the species that stay together for the rearing of young, there is an attachment effected by some mechanism, possibly describable as emotional. Perhaps the interaction in which birds have the experience most like our love-making is not when they mate. Said another way, perhaps for birds mating is not when they truly make love. 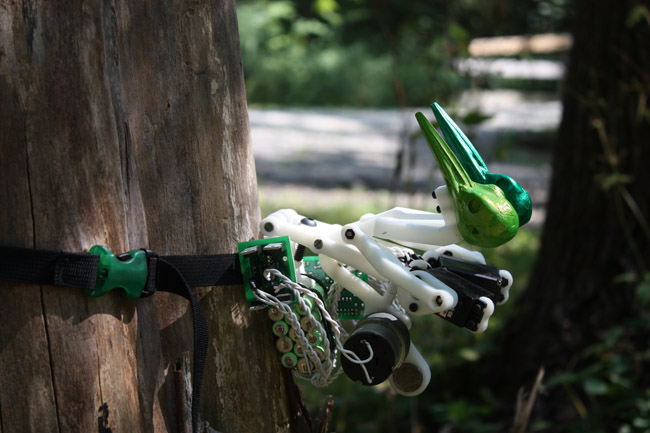 After two Pileated Woodpeckers have chosen each other as mates, the very next thing they do is seek a suitable tree in which to excavate their nest hole. The male has been "drumming," i.e., rapidly beating his beak against a resonant tree trunk to produce a territorial signal that echoes through the forest. This has attracted the fine mate who has joined him. Now he switches to "drum-tapping" at a location on a tree that he thinks has desirable qualities for siting a nest. If the female does not agree with his site choice, she will drum-tap on another tree or location. Incrementally, the woodpeckers will narrow their search until they both agree on a site and hence are both drum-tapping on the very same tree in the very same place on the trunk. They then begin the excavation.

Throughout this drum-tapping process the two birds are very agitated in their movements and appear to be at an elevated level of excitement, frequently uttering little cries of unfettered glee. Perhaps this tree-seeking procedure is the equivalent in Pileateds to our foreplay or even our sex act. Perhaps the birds feel a mixture of emotional bonding and bodily pleasure from the good vibrations of the drum-tapping that natural selection has favored to align their individual goals with the shared goal of excavating a nest, mating, and eventually rearing young. There are analogues in other avian species; for instance the splashing, synchronized swimming of the Western Grebe. These activities of the woodpeckers and the grebes may seem more like courtship or marital bliss but when the sex is so momentary, so secondary, again they take on more of the emotional significance that does sexual intercourse for humans. In essence, drum-tapping is sex for the woodpeckers. 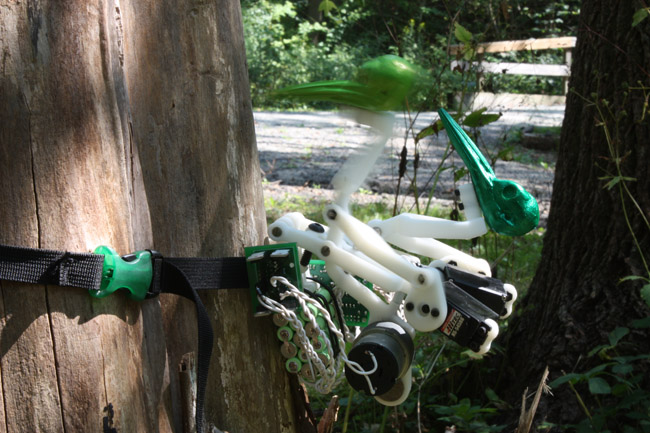 The concept of the sex robot is older than the myth of Pygmalion but for the most part the form is humanoid and the robot is intended to give pleasure to a human in recognizably human ways. We have neglected other possibilities. We have neglected the pleasure of the robot, at least insomuch that if there is such pleasure it is really intended as a secondary vector to pleasure in the human user. We have also neglected that the robot might find pleasure through a non-human animal's model of sexual activity.

I present The Woodiest, a strap-on robotic system that addresses both these neglects. Strapped to a tree in an expansive tract of mature forest in North America, it listens with a microphone for the signature territorial drumming of an invading Pileated Woodpecker. When it hears such drumming, it responds by raising its male sub-system and drumming back, simultaneously declaring its territory and indicating where it would like to build a nest. However, in this case, its mate is built-in: after retracting the male head, the machine raises its female sub-system and drum-taps in the exact same place. The result is an auto-erotic, hermaphroditic, all-in-one woodpecker love-bot. It exists to pleasure itself via the Pileated model and through performing both roles it can fulfill its needs independently of another entity. Besides, of course, the instigating extra-terrestrial invader.

Link back to project page